I’ve found that blogging on a regular basis is not my strong suit. Oh well, there are worse things in life. I’ve been home for awhile now, but just in case someone stumbles across this page and wants to know kind of wild adventure a red-bearded, 41er, wrangler, Texan went on when he was 21, I’m leaving this link right here.

If your that person from some distant future, then hi, hope you enjoy the video.

Been awhile, and a lot has happened, but today’s adventure needs to be told.

This morning saw me up at 4:45.Me and my grandparents were supposed to meet a van for pickup at 5:30. We were signed up for a “guided walk” through a national park here in New Zealand. We met our van and I just watched the dark countryside roll by as we were driven out of the town.

When we got to the company’s headquarters however, it turned out that “guided walk” meant different things to different people. The rest of the patrons were gearing up in Gor-tex hiking boots, hardshell jackets, and top-brand daypacks. What I thought was a glorified nature walk, was in fact a 8-hour, 13-mile, mountaineering trek that went up the side of “Mount Doom” (yes, the one from the Return of The King) through the volcanic crater, and back down again.

I had worn shorts! I had a packable traveling backpack, trail-running shoes, and one softshell without a hood! Clearly, neither me or my grandparents were prepared for this. So I smiled at one of the employees, and explained the situation expecting a disappointing drive back to the hotel. Instead, he said that we could go the first few hours of the walk, as they were on relatively flat terrain and low altitude. “But, if you want to, we do have gear here that you can borrow if you want to go the whole way.”

My eyes lit up. I looked over at a woman about my age getting fitted for crapons. One of the guides loading up ice-axes. I’ve never been mountaineering. I’ve hiked, I’ve rockclimbed, but sport that had taken explorers to the top of Everest was completely out of my experience. And this was my shot to change that.

My anxious grandfather asked repeatedly if I really wanted to do this. “Relax, I can do this.” I said, big grin on my face. Although I wasn’t completely sure myself. I was given a thermal layer for both top and bottom, a pair of waterproof pants, gloves, and a wind-water-proof jacket. Then I was issued crapons, an axe, and a climbing helmet. I stuffed this, my water bottle, and a sack lunch into my floppy backpack, and thanked God that I decided to wear merino wool socks that morning.

We hit the trail. The first 2 hours were reasonably easy. A light drizzle and heavy cloud cover were foreboding, but the guides hoped they’d pass on soon. We were hiking through the results of volcanic lava flow from thousands of years ago. The brown and red bushes that covered the rolling hills that sat a the base of the mountain were covered in tick fog. It reminded me of the haunting tales of the Scottish moors. About halfway to the first climb, I recognised the landscape as the swap from the Lord of The Rings, where Gollum first encountered the hobbits.

We began out assent. It was just stairs, but there were a lot of them. I felt my ears pop several times as we gained altitude. The higher we got, the stronger the wind blew the cold drizzle into us. We passed drifts of snow. Not 12 hours ago I couldn’t imagine seeing the stuff in this Country at this time of year. The drifts turned into the dominant aspect of the mountain landscape as the climb got steeper and the temperature dropped.

The clouds still hadn’t broken, but we marched on. Our guide lead us off the obvious man made stairs onto the snowy mountainside. Soon white was the only colour in sight. We put on our crapons, and continued upward. 10 yards away I could make out the shape of a rock. Everything else, the sky, the mountain, the very world, was hidden by a white curtain of snowy fog. I remembered the stories of people lost in blizzards only a few feet from shelter. If I got separated from my party, there would be no way of knowing which way they were, where I had come from, or even what way was down the mountain.

Using our ice axes as walking sticks, we climbed the barely visible and narrow track up towards the volcano’s crater. The drizzle had turned to sleet, the wind howled at us, pounding the icy air into us, and threatening to blow us off the mountain. My gloves and feet were soaked through, my face was being ripped you the sleet, we’d been climbing over rough terrain uphill for hours, and I couldn’t be more excited.

Eventually, we got to the brink of the crater, and headed down into the base. The smell of sulphur filled my nose. In the hazy mist, I thought I could make out a familiar ridgeline. I knew those hours wasted watching LOTR instead of writing papers in high school was a long-term investment!

We made it through to the other side of the mountain, and started the slough back towards flat land. At one point, our guide said we could save some time if took the shortcut of sliding down the slope on our butts instead of taking a winding length of trail. We slung our backpacks in front, gripped our axes tightly to use as brakes, and took turns careening down the mountainside to the trail below.

The day was long, cold, wet, and tiring. I hiked 20+ kilometres today, literally up and down Mount Doom, all in borrowed gear. I was expecting an easy, brisk walk through a small park. Instead, I got my first experience with mountaineering, and I can’t think of anything I’d rather spend my day doing. 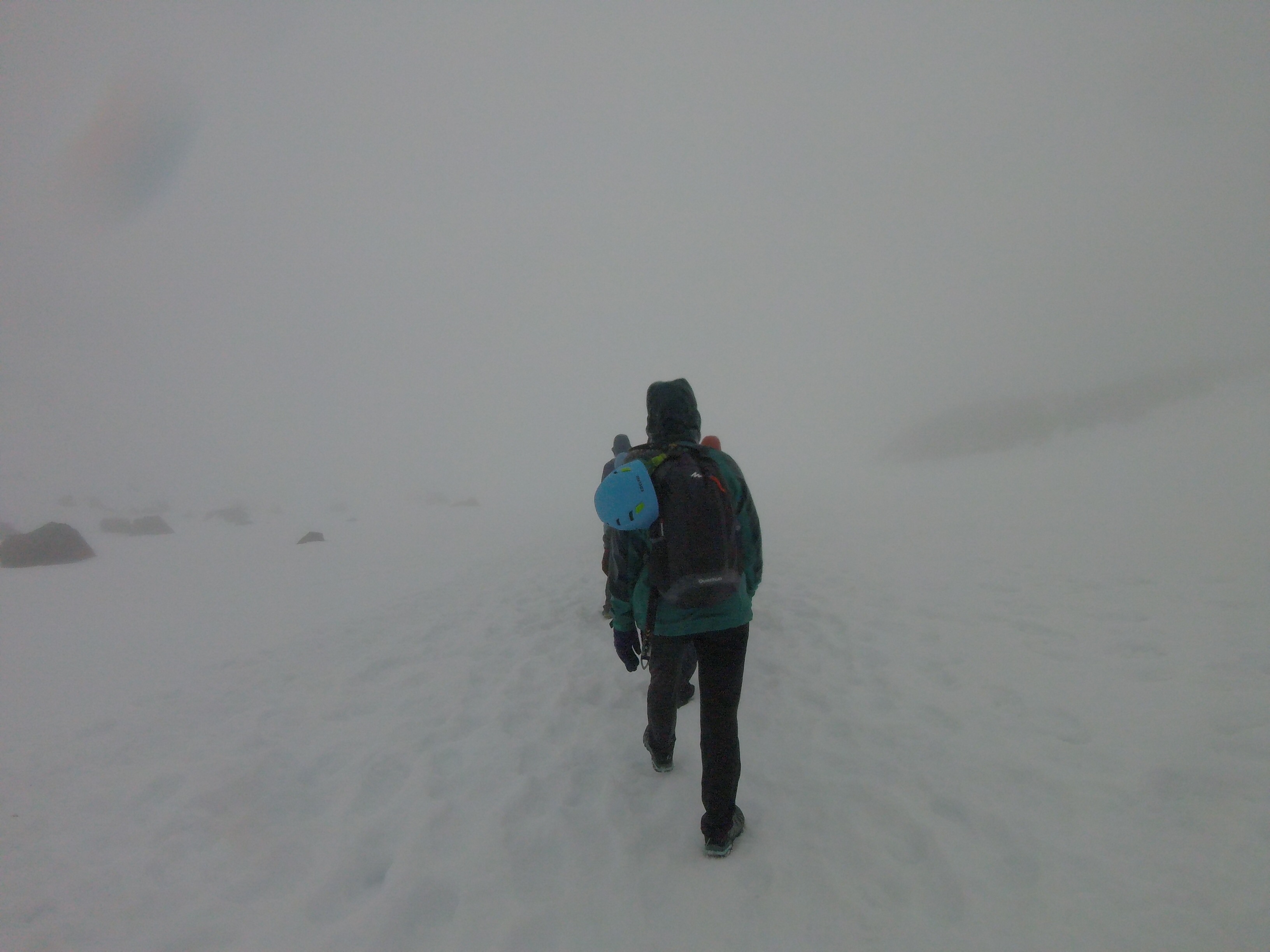 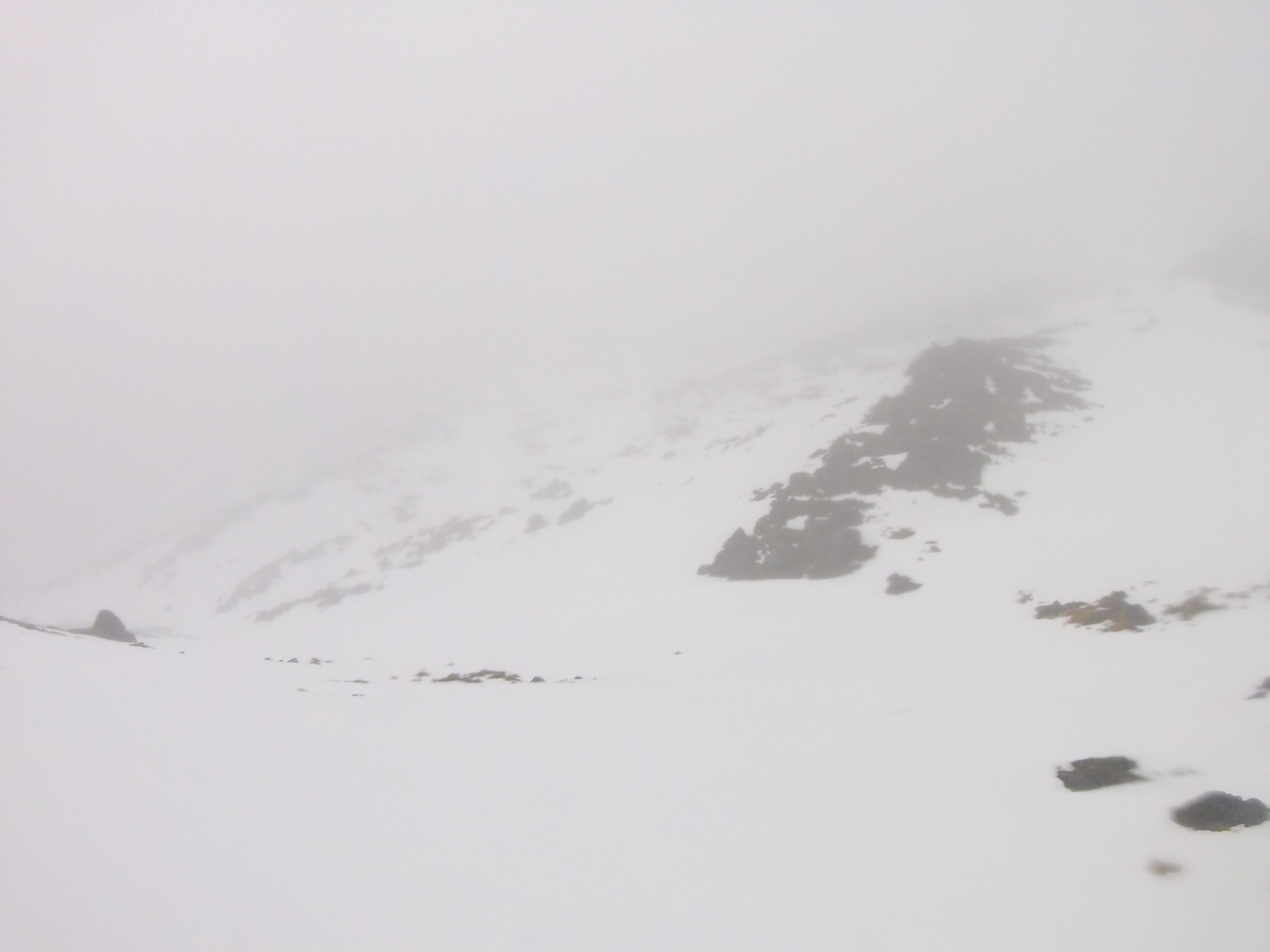 Saturday morning felt a little earlier than usual. The night before had seen me up late finishing up a paper, and a 7:00 wake up that morning. Nevertheless, I got ready and packed my gear into my daypack. A little later, my friend Tay picked me up, and we started the drive out to the Bunya Mountains. We met up with Shannon and Matt, and made our way across the Queensland bush country toward the mountain rage. We arrived in time for a picnic lunch, and I discovered a whole family of wild wallabies, a smaller version of a kangaroo, just a few yards away from our table. We started in on the mountain trail, which felt like deep rain-forest. I found a tree to climb, and rocks to climb, and basically took as many pictures as I could. From the jungle-like terrain, to small but beautiful waterfalls, to breathtaking mountain views, there was a lot to capture. Afterward, we drove down the mountains to a swimming hole, which was fun, but that water was beyond cold! It was an awesome day-trip with friends in some of the most beautiful parts of Australia I’ve seen yet. 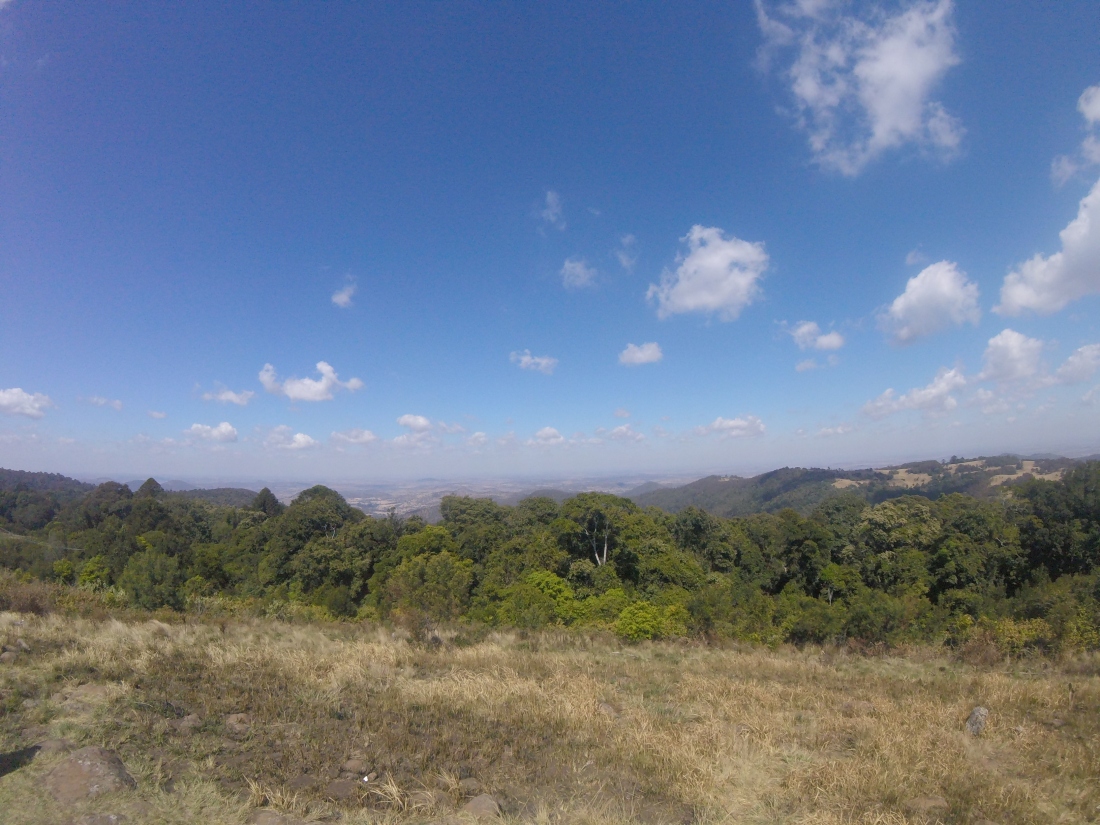 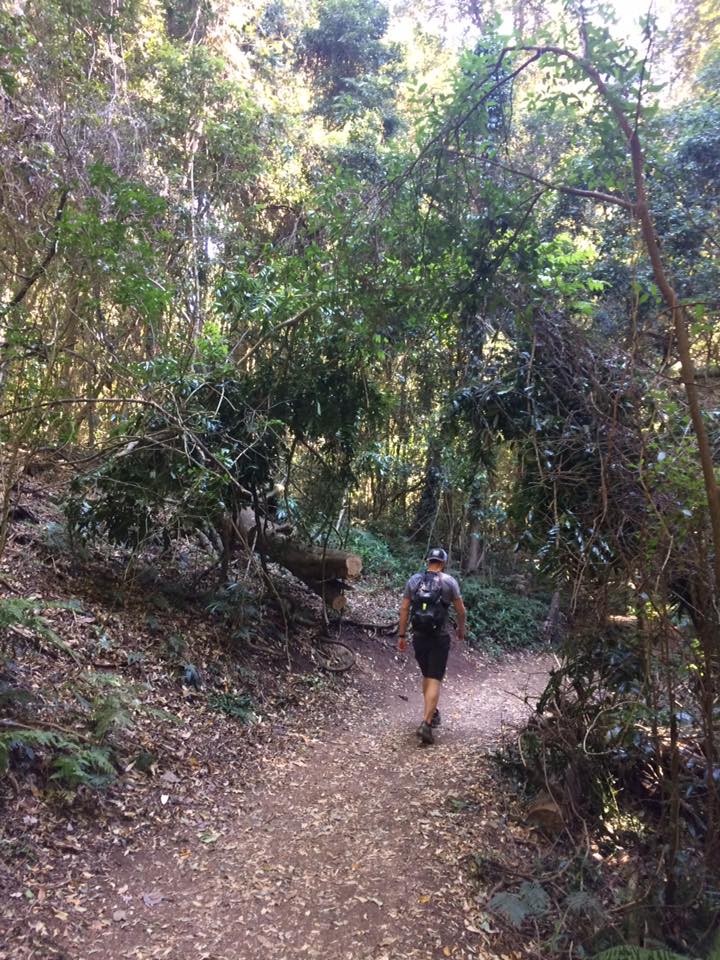 Psst… if you made it all the way to the bottom of this post, congratulations!! Your prize is a link to a video of the trip!!! https://1drv.ms/v/s!Ar0R-yQxbTPpikM2QLFs4V4d5P1g

The other night we had two visitors at the College (dorm) pass by. I apologize for the rather low quality of the photos, but it was what I could get before they flew (or hopped) off.

A quick one-off for y’all, I walked out of the dorm this morning to see a pair of Kookaburras, and went back in for my gopro. Turns out, kookaburras are surprisingly tolerant of humans, this one let me get the camera just inches away before flying off. 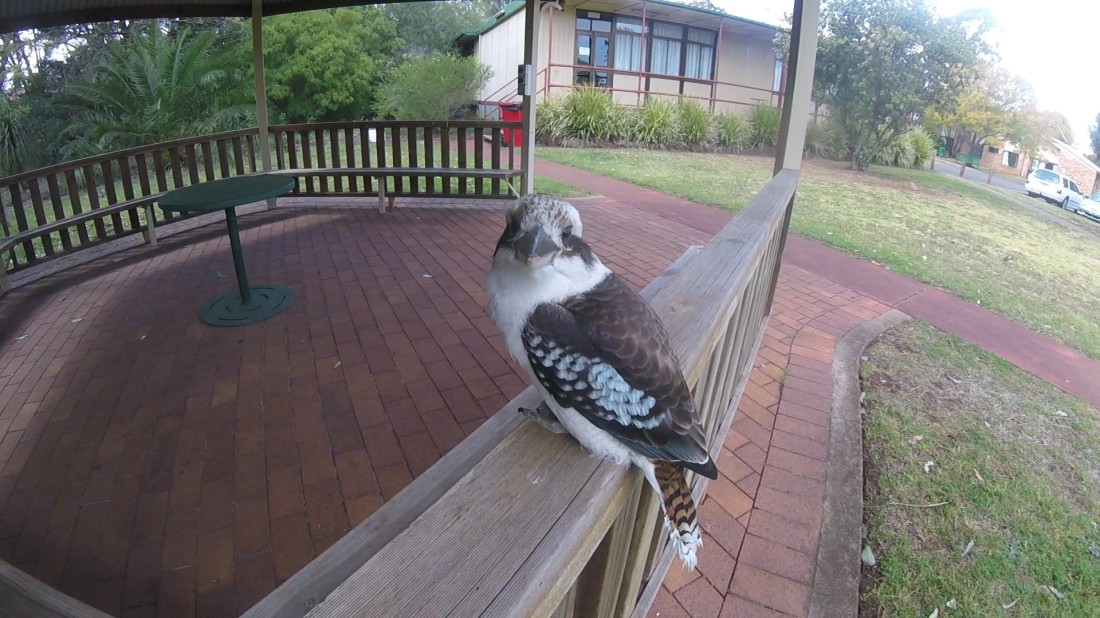 Before I left Texas, I had a summer job. I worked as a wrangler, or horse caretaker, at Pine Cove Silverado over in Columbus. Wrangling is one of the toughest jobs staff can have, and I soon found out why. A typical day involves getting up at 5:00 am to get to the barn by 5:30 (tardiness is not tolerated) We set out feed buckets for the horses, have a quick devo, then catch the horses out in the pasture with rope halters and lead ropes, and tie them up at their assigned buckets. We then brush and pick them as they eat, and then saddle them up just as dawn breaks. Hopefully we’d get a little time afterward devoted to quiet time (or spiritual discipline) before walking up to breakfast. Even at meals your expected to serve the campers and councilors, sitting at a table, and making sure everyone has enough to eat, drink, and the kids don’t get too rambunctious.

After breakfast, we head back to the barn to bridle and tighten cinches. We’ll then have our first activity class, either taking kids on trail-rides, an obstacle course, or some simple trick riding. (also, large, skittish, animals combined with loud, sudden-moving little children really did not do any favors to my overall peace of mind during this

) We do two activity classes before and after lunch. Afterward, we unsaddle and hose down the horses before turning them loose in the pasture. We pick up any manure, rake the barn, sweep the tack-room, and make sure everything is put away. We then have a few minutes to clean ourselves up for the theme night before helping out with that. By the time we get back to our cabin, it’s 9:30 pm. We shower, lay out our clothes for tomorrow, set our alarms, and sleep like the dead until we get at 5 to do it again.

The job was tremendously challenging on a physical, metal, emotional, and spiritual level. Time off was limited to 24 hours on the weekend, and we were always in motion unless we were sleeping. But I grew in more ways than I can count, and learned some new things about myself. While the challenge was exhausting, it was also exciting, and I want to go back next summer.

There was also a time I rode a steer, and the time I packed for a globe-trotting adventure in a single day. But those are stories for another time….

Here’s the first real update. A few weeks ago, I found out what a Plover is. It’s a bird that’s pretty common here in Queensland, but is extremely territorial of its flightless young. Turns out this plover had a chick with it, and it was none too happy with me getting too close. 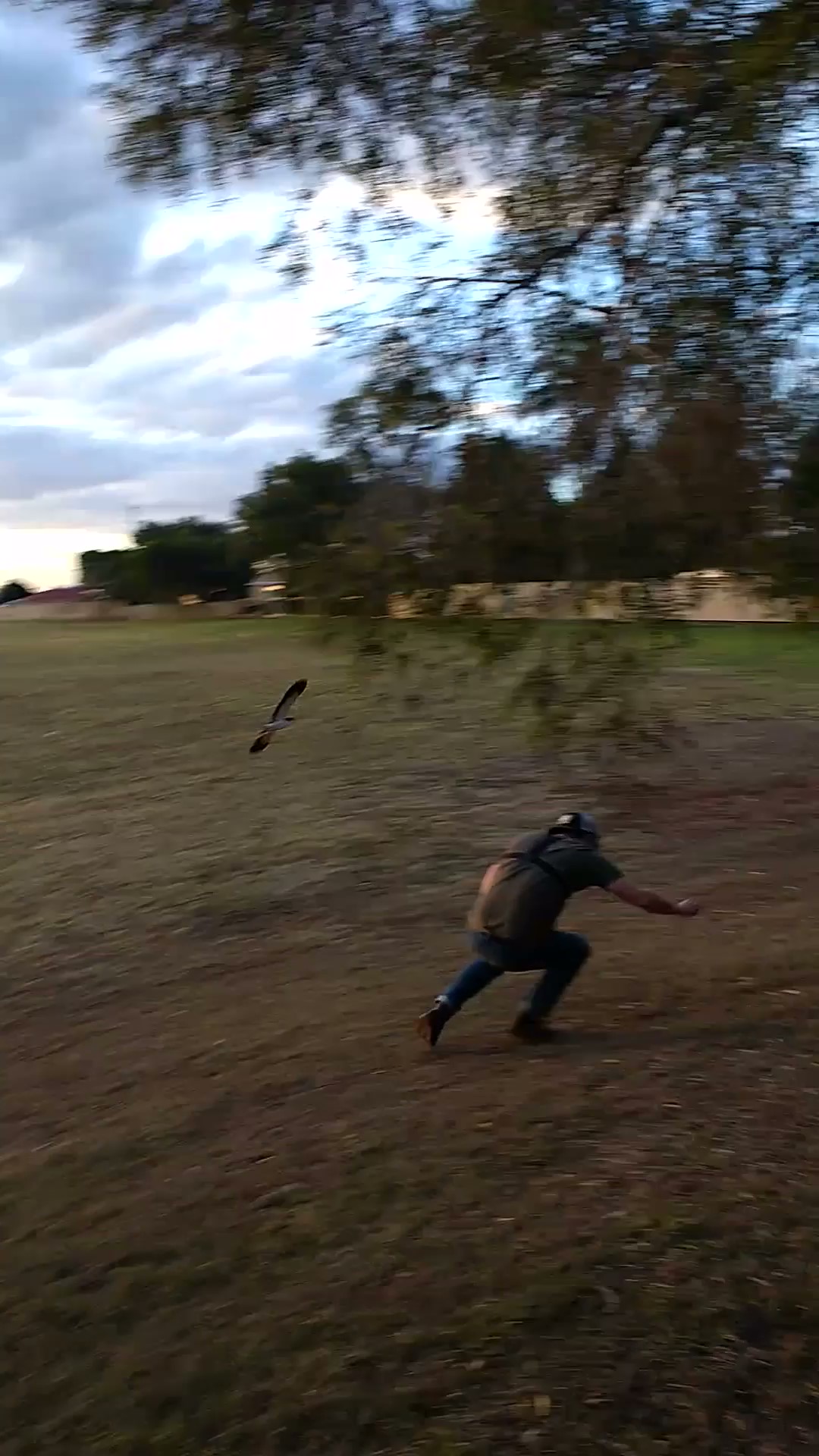 Hi, I’m Stripes, or Woomba, or Sam. Whichever you prefer. Make sure to keep up with my adventures here and on Instagram.